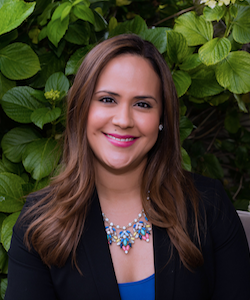 Ms. Dominguez has substantial experience in all aspects of family law matters, such as child custody and visitation, domestic violence issues, property division, characterization, allocation, and valuation; reimbursement claims; spousal support; child support; breaches of fiduciary duty; pre-nuptial agreement disputes and post-judgment matters. Ms. Dominguez values assisting her clients to resolve their issues and understands the concerns that may arise when dealing with the legal system in the area of family law. It is important to her that her clients are provided with the necessary information and advice in order to successfully resolve their family law matter.

Ms. Dominguez received her undergraduate degree from Santa Clara University in 2000 where she double majored in political science and Spanish. She received her law degree from Santa Clara University School of Law in May of 2003 and was admitted to the California State Bar in December of 2003. While attending law school, Ms. Dominguez gained clinical experience working as a law clerk for the East Bay Municipal Utility District and volunteering at the Katharine and George Alexander Community Law Center. She also participated as a competitor in Honors Moot Court.

Ms. Dominguez is an active member in the Family Law Section of the Santa Clara County Bar Association. She is fluent in Spanish. Ms. Dominguez enjoys spending her free time with her husband and two children. You may email her directly at ydominguez@daprile-bell.com.